Check out top players by grade from 2021 event. Congrats to these standouts!

It's never too later or too early to order gear from this event!

Parents from ALL teams are REQUIRED to submit this for their son before event.

Want to play but you don't have a team? We can take care of you! Apply here now.

The success of our tournaments relies heavily on the combination of great volunteers and partnerships established with our sponsors. Avanti Travel s is the exclusive travel partner for Club Nationals. One of the criteria for acceptance into our tournament is that any team requiring hotel accommodation must be secured through Avanti. Any team not complying with this directive will be denied entry into the tournament. Avanti has secured blocks at the participating host hotels so be sure to contact them early to book your team. The reasons for implementing the "Stay & Play" policy are to simply lock the best rates possible for you as traveling guests. Also, Madlax is able to prove to the host towns we have a positive impact on their local economy and thus build stronger relationships and gain access to priority venues. MORE HOTEL ROOMS mean better RATES and even better tournaments for you! We thank you in advance for your support.

A very special thank you to the 79 teams who participated in the Club Nationals in Jan 2021!  It meant a lot to have your support and we really hope you had a memorable experience. We will keep this event between 80-100 teams in 2022 to maintain quality control. We hope to see all teams return in 2022!

Welcome to the  2022 Club Lacrosse National Tournament powered by USCLUBLAX held in warm and gorgeous Orlando, Florida at the new and amazing Austin-Tindall Sports Complex.  Located only 20 minutes from the Orlando Airport (MOC) and 20 minutes from Disneyworld, and 20 minutes from multiple partner resort & hotels, this event established itself as the premier vacation style lacrosse tournament for boys 5th-11th grade  teams!

This event features team in the  TOP 100 as ranked officially by USCLUBLAX HERE.  USCLUBLAX, the nation's leading club lacrosse media outlet for rankings and social content, will be powering this tournament.  They will handle all social media before, during and post event!  The USCLUBLAX Top 100 Rankings features the most talented teams in North America who will battle it out in the FIRST OFFICIAL ELITE TOURNAMENT of the 2022 Club Lacrosse Season. Results will count toward the first 2022 USCLUBLAX Official Rankings at the highest registered level.  Only teams who appear in the current US CLUB LACROSSE rankings will be invited to participate, but the event will still be open to all 2028-2029 teams.  USCLUBLAX will start 2028 rankings in January 2022 as well. So, if you want your 2023-2028 club team to be considered for the 2022 USCLUBLAX rankings you need to get to the CLUB LACROSSE NATIONALS!

To make it even better, this event is a vacation style family lacrosse tournament. The amazing Gaylord Palms Resort is our partner hotel! Teams will play games over 3 days to allow for more resort, Disneyworld and relaxation time with your friends, teammates and family.  Teams must stay in one of the world class resorts or hotels or villas we have set up specially for traveling teams which are all nearby.  The lighted bermuda grass fields each with professional digital scoreboards, are only minutes away from most spots. It will truly be a memorable event that your entire family will want to attend. So come down early and make a fun trip.

Email us here with questions or for more information, mdlxevents@madlax.com

Should Madlax, Austin-Tindall Park, Kissimmee County or the State of Florida cancel the event due to Covid we will issue a refund. If a team decides not to attend but the event is still held we can not issue a refund for that team.

NLV - Next Level Video is our exclusive VIDEO PARTNER for the CLUB NATIONALS !

Contact Dylan at NLV 610.660.9980 or dylan@nlvproductions.com for more information and to order.

Championship Games will be produced by LSNetwork and shown within 2 weeks after the event with announcers and play by play. We will share those games once produced in studio!  So, anyone in the world can watch the finals!

We hope this event will provide a perfect opportunity for your family to enjoy all that the greater Orlando area has to offer!

We have arranged exclusive discounted pricing for ALL families attending the Club Lacrosse Nationals. 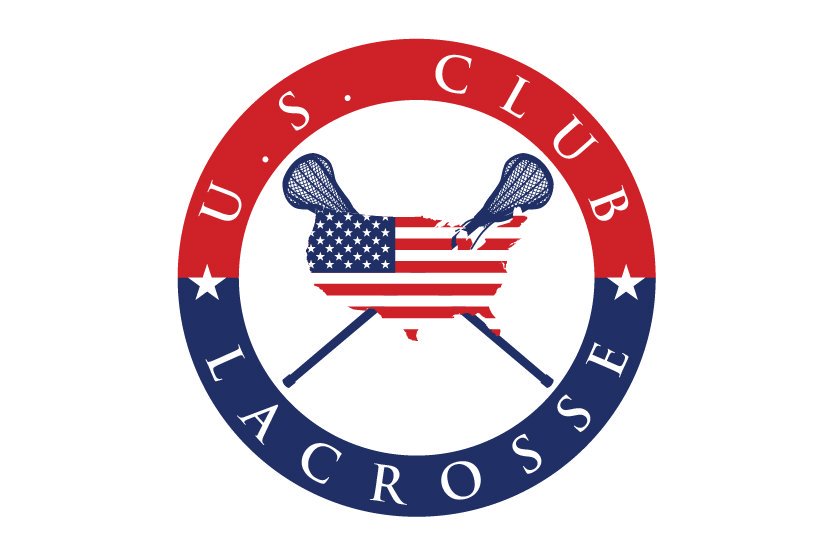 Past Schedule & Results on Tourney Machine 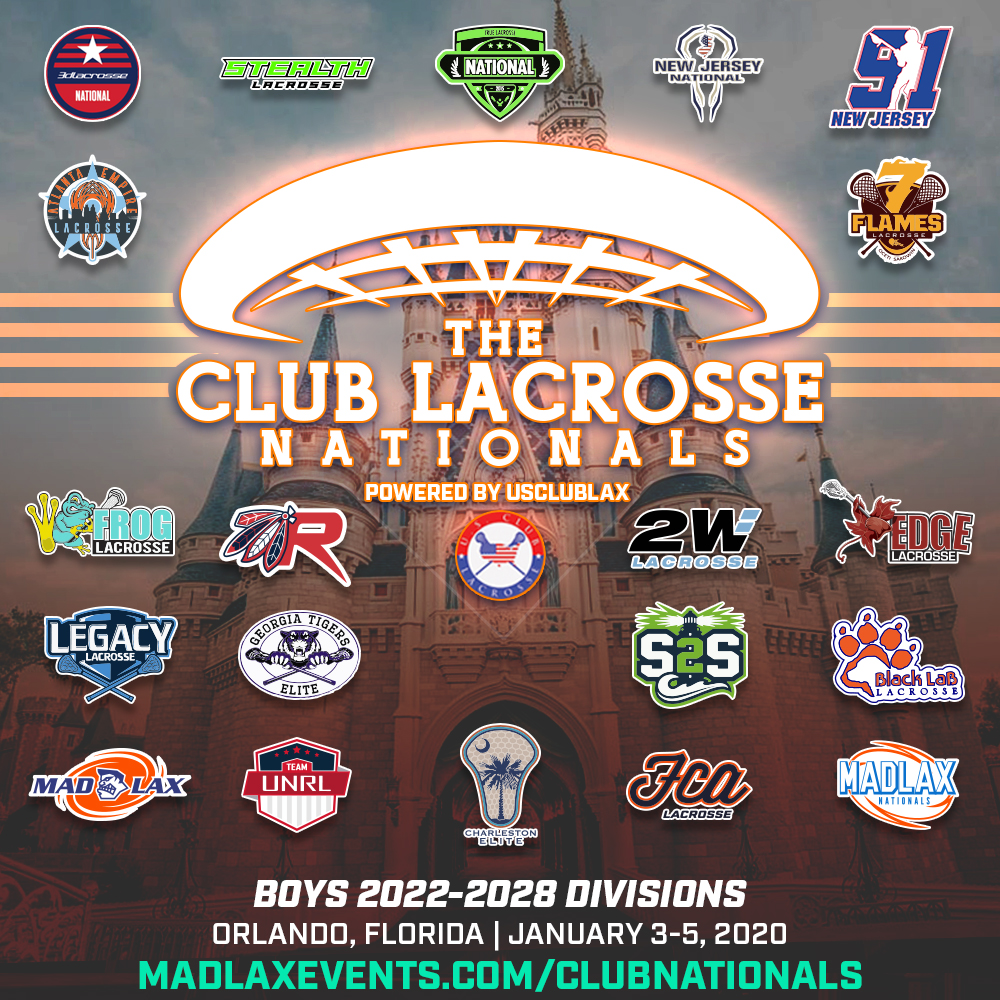 Tournament Scheduling (Flights):
We encourage families to arrive days early to enjoy Disneyworld, Universal and all the magical area attractions. Please arrive to the Orlando airport no later than Friday by 1pm and leave Sunday after 5pm to be safe (the exact game times are posted above on this page).  We will start games at 4pm earliest on Friday so most teams will play one game under the lights!  In general, teams will play 1 game on Friday, 2 games Saturday and 2 games Sunday but that will change with odd divisions  We will play most championships in the stadium Sunday back to back with youngest teams playing first so older teams will play well into the afternoon on Sunday.  Again, try to book flights as late as possible on Sunday.

This schedule will allow for teams to see Disneyworld and enjoy Orlando. Every division will be 'OPEN' meaning we will not differentiate between B, A & AA teams.

Parking: Parking at the facility will cost $5 per day.

Special Features: USCLUBLAX! They will do a lot. Pre, during and post event complete social media coverage.
Features:
Championship Game Livestream on USCLUBLAX Youtube
Player Interviews after key games
Players to Watch Preview on Instagram
Game Match-Ups Preview Live on INstagram
All-Tournament Teams after event
Fastest Shot Radar Gun
Championship games will be played in the stadium and shown on USCLUBLAX Instagram LIVE through so family and friends will be able to watch it live from anywhere in the world!

Waiver & Rosters:  Online Waivers HERE are REQUIRED by all Parents of every player! Please see the 'Player Waiver' link above and fill out. Waiver forms for all players are REQUIRED by 12/20. Parents will need to fill out the online form for each individual player.  The waiver will serve as means to confirm age eligibility. Failure of a parent to do so may result in an entire team being disqualified.  Rosters are required for all teams showing name, jersey # and grade and are to be submitted by Club Directors/Coaches before 12/10.

Retail Store & Food Vendors:
Vendors will set up with official tournament gear and apparel.  There are two food concession stands on site.  There will be retail tents for you to purchase all of your lax gear, accessories as well as the Official Tourney Tees and Shorts!

Champions Prizes & Awards:
Winning programs will be awarded a custom Team Plaque!  Players on all winning teams will receive a custom Team Champion Medals. In addition, a Tournament MVP trophy award will be given to the player most deserving on the winning team right after the Championship Game. There will also be All-Tournament Teams post-event without award but with plenty of social media recognition from USCLUBLAX & MADLAX Media.

In terms of weather, Austin-Tindall uses the ThorGuard system in place at the facility., a lightning prediction system.   If the system goes off with a 15 sec blast the complex needs to be cleared with everyone returning to their cars until the all clear has been sound.  As it relates to rain, we want all our events to be completed.  We will work with our event during the rain to determine when the fields are no longer in a playable state for the safety of the players.